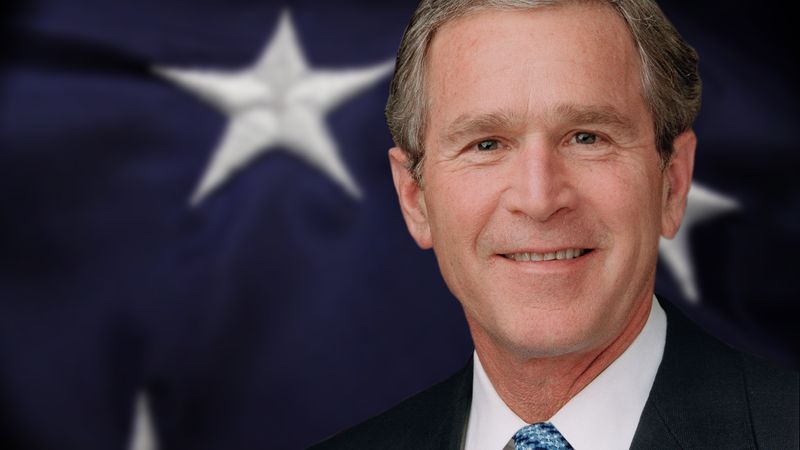 George W. Bush served as president of the United States of America from January 20, 2001 - January 20, 2009. During his presidency he implemented immigration policies that were perceived to be both beneficial and deteriorating towards immigration policies. He believed higher security measures were to be put in place to impede illegal immigration from occurring, while also admitting that those who came to the U.S illegally should come out of the shadows and be recognized under the American law. Only if they were to meet the requirements and wait in the "back of the line". A term that suggested, undocumented immigrants should patiently wait for their legalized process, behind those who entered or are trying to enter the U.S legally.

PDF version of the Patriot Act
What really highlighted the Bush administration stance in immigration policies was his reaction to the 9/11 terrorist attacks.
The Uniting And Strengthening America By Providing Appropriate Tools Required To Intercept And Obstruct Terrorism, otherwise known as the USA PATRIOT ACT of 2001, was the immediate response from the U.S government in reaction to the terrorist attacks. The PATRIOT ACT was “An Act, to deter and punish terrorist acts in the United States and around the world, to enhance law enforcement investigatory tools, and for other purposes.”

Some argued that it was an increase in power, that violated civil liberties but the legislation was passed because its defenders say it was for the greater protection of America. While the PATRIOT Act targeted various areas to prevent and deter terrorism, we focused on its effect on immigrants.
Through the act, authorities were able to indefinitely detain immigrants who posed a threat,  without facing any legal consequences. Detained immigrants were stripped from their lawyers and prevented to receive a trial. Deportation to their home country was also prevented because they posed as a threat to the U.S.
One might wonder why this lengthy amount of legislation was passed rapidly and with a majority of both the Senate and House votes. The most probable answer was that citizens in the U.S were fearful and shocked over what had just occurred, and they needed a sense of security within the country. The government under a national emergency created laws that would ensure the safety of Americans even if it contained “extremist content,” a description to those who opposed the bill.
President Bush signed the legislation on October 26th, 2001. He agreed that the Patriot Act was needed to stabilize and protect America. In 2006, President George W. Bush once again signed the renewal of the Patriot Act.
CBP was founded in March of 2003 and its priority is securing the border of the U.S. It enforces “customs, immigration and agricultural laws and regulations” (U.S. Customs and Border Protection). Many people confuse ICE with CBP, often mixing up their authority abilities, thus it is crucial to know the difference between the two agencies because they are discussed once again further in the research.
Bush’s administration is marked as an era of enforced and enhanced security measures concerning immigration, so how did it resonate among the immigrants living inside the U.S?​

Tomas Foral, a Czech-born immigrant who attended the University of Connecticut as a graduate student became the first person to be charged under the USA Patriot Act. The 26-year-old was handling biological specimens from a broken lab freezer as instructed by his professor and came across samples of an anthrax-infected cow. The FBI got involved and accused him of possessing a biological agent with no “reasonably justified” purpose. His name was later added among a government watch list of criminals. While he avoided jail time, he has continuously faced inconveniences. Foral is upset that the anonymous tipster exaggerated the scenario of the possession of anthrax, and he believes it could have been managed internally instead of calling for the FBI. Foral also deals with the authorities when at an airport because of the criminal database he was entered in. The importance of this event is the fact that immigrants became a vulnerable target, treading carefully during this era.
If you would like to read more about the case, click on the link: https://www.latimes.com/archives/la-xpm-2002-aug-28-sci-micro28-story.html